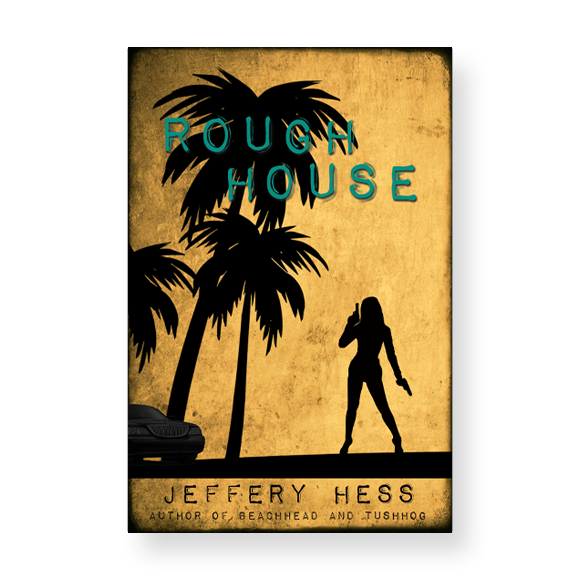 It’s August 1986. The Cold War rages and Yuppies make all the money. Fresh off a three-year stretch at Starke for keeping Pearce family secrets, Scotland has a new place to call home on Fort Myers Beach. All should be perfect except Scotland’s wife is going to die unless he comes up with $100,000.

In Roughhouse, Jeffery Hess returns to the unforgettable world of good-natured badass Scotland Ross—hero of his critically acclaimed Beachhead and Tushhog—to tell the powerful story of people stretched to extremes.

It’s August 1986. The Cold War rages and Yuppies make all the money. Fresh off a three-year stretch at Starke for keeping Pearce family secrets, Scotland has a new place to call home on Fort Myers Beach. All should be perfect except Scotland’s wife is going to die unless he comes up with $100,000.

He enlists a trusted friend to help him rob a Tampa casino to pay for her unconventional treatment. While freely risking life in prison if he’s caught, he never thought his trusted accomplice could go rogue and turn against him. On top of that, his long-lost nieces come to him in need of help only he can provide, while a mysterious female former Marine has her own surprise plan for him.

Scotland hurtles through his new-found freedom right back into a storm of violence and pain with strong women and treacherous men gusting in all directions. Without him, the women would be doomed; without them, he would be. Yet, success and failure are put to the biggest challenge by an unsettled score from the past that threatens to bury them all in the surf.

“Rounding out a trilogy is never easy, especially one with as memorable an anti-hero as Scotland Ross, the on-again/off-again criminal-with-a-heart-of-gold who managed to shoot his way out of Jeffery Hess’s Beachhead and Tushhog. Yet Hess’s finale to cap the series not only delivers, it firmly sets Hess up with the masters of Florida rough-and-tumble crime fiction. Roughhouse pummels Scotland Ross as he fights his way through heartache, betrayal, shifting family loyalties and unbreakable family bonds, all set against a backdrop of bullets and cash, salt and sun, the best that Florida has to offer.”

“A bruised and bloodied hero punching destiny’s jaw one last time. Tense, gritty, emotional. Roughhouse carves a fitting end for the unbreakable Scotland, who, like the 80s itself, ain’t accepting fate easy.”

“What a wild ride! I really dig that this book is noir through and through yet has this emotional beating heart at its center. I could read about these characters and their wacky Floridian lives all day. Well done, sir!”

-Chris Rhatigan, author of Squeeze and Race to the Bottom

“Scotland Ross is a good man running in a merciless world. It’s a good thing he’s built for the battle. This book reminded me of early Elmore Leonard books. I’m embarrassed to say this is my first Scotland Ross novel. But I’m fired up that I can devour the other two.”

“Edgy, rich and excessively smart, Roughhouse might be that rare third element of the trilogy, even better than its predecessors. Regardless, it is constantly entertaining and, even better, always artful.”

-Fred G. Leebron, author of Six Figures, Out West, and Welcome to Christiania
Go to Top